We saw this sign the other day while cycling Sustrans's NCN Route 72, between Carlisle and Newcastle.

It's called Hadrian's Cycleway, because it largely avoids the remains of Hadrian's Wall.

Helmets are emphatically not required by law in the UK, though this sign seems to be recommending them.

However, the pattern of helmet proposed here surely does not conform to either the European Standard EN1078 or the supplanted, but more stringent, Snell B-90 standard.

Now, it may provide some protection against injury in some forms of accident, such as being assaulted by a Pict with a squarehead axe.

But there is no experimental evidence to suggest it would protect in impacts with chariots or Roman Road surfaces at speed; besides, there is arguably an increased risk of rotational head injuries caused by projecting parts of the helmet snagging during collision. 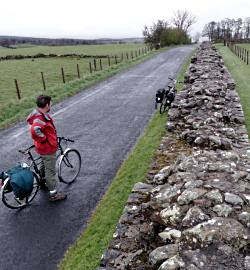 Anyway, the Hadrian's Route is OK (right), gives you an insight into what tribal life was like in primitive times on the edge of civilisation.

Especially if you go out for a beer in Carlisle town centre on Saturday night. A helmet there might not be a bad idea.
Posted Friday, June 08, 2012