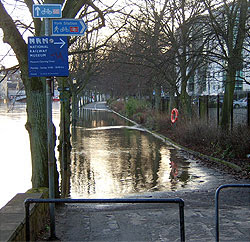 The stormy weather through the week flooded the Ouse in the centre of York.

High water here is nothing unusual. Indeed, the King's Arms by Ouse Bridge is regularly inundated: a floodometer inside shows levels over the years, the highest of modern times being in 2000. (Because its cellars tend to turn into fish tanks during much of winter, it only sells keg beer.) 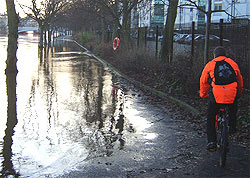 Nevertheless, the quick rise of water on Friday morning caught a few people on the hop.

Quite literally, when they found the riverside cycle track by Scarborough Bridge was a foot deeper than they anticipated. 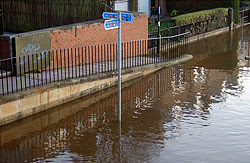 Anyone following the cycle route signs from here to Beningborough along NCN65 would be in trouble. It's hard to pedal in flippers.

York being a real cycling city, nobody queries if you aren't wearing a helmet. In this weather, though, they might raise an eyebrow if you're cycling without a snorkel.