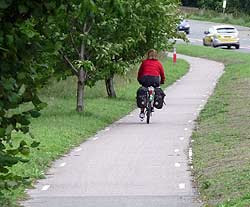 We were rather taken by this starry bike path. It leads east out of Cambridge towards Newmarket.

By day (right) it's your average roadside cycle track. But by night, lighting units (below right) set in the tarmac twinkle into action. 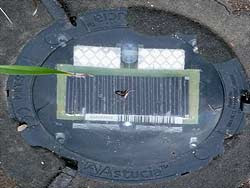 They've only been here a couple of weeks and we're told they're not solar - like similar units installed in other cycle paths in Cambridge - but luminous, whatever that means.

It seems to us a very good lighting solution (right). We much prefer this to floodlighting, whose shadows create more problems than the lights solve. But these twinkly lights form an easily followed constellation (with Mars-like red versions to show stop lines at junctions) and don't intrude outside the range of the bike path itself.

And they're clearly better than nothing (right).

They're also rather romantic. If you find the Hubble Space Telescope romantic.

Still, anything that can make Stow-cum-Quy and the A14 a must-visit romantic destination on a dark night is OK by us.