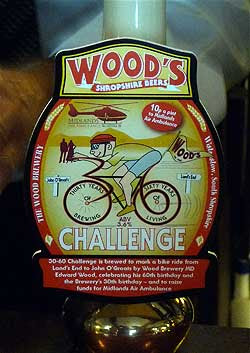 We spotted this special cycling beer on sale in a Shropshire pub over the weekend, during a biking break in the hills round Church Stretton.

The one-off 30-60 Challenge ale comes from Wood Brewery, based in Craven Arms (that's a place, not a pub). It marks a bike trip by its MD, Edward Wood. He's celebrating his 60th birthday (and the 30th of the brewery) by cycling from Land's End to John O'Groats, and he starts today (he's on Twitter, too).

Edward is raising money for Midlands Air Ambulance, and 10p from every pint goes towards to the charity. The deliciously hoppy brew quickly became the official beer of our weekend too. In the Green Dragon pub in Little Stretton - which, incidentally, does quite the best pub chips any of us could remember - we must have contributed enough to buy them a helicopter already.

Good luck, Edward. We think the idea of celebratory biking brews is an outstanding one. Perhaps you might do some commissions for us, too, when you get back?

Anyway, here's some ideas for one-off, London-based, cycling ales:
• Cycling Superhighways Special - identical to beer that was there before, only coloured blue
• Boris Blond - lots of fizz and energy, flows smoothly, but no taste
• Council Cream - dull and thin; only comes in half-measures, and liable to give headaches
• TfL Tipple - mostly froth, and a watered-down feel
Posted Tuesday, May 04, 2010